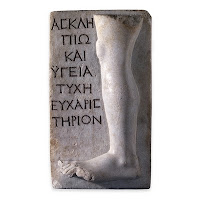 Whether in thanks for a good recovery or in hopes of a successful one, many votive offerings like the one to the left have been found in Roman and Greek temples and shrines across the ancient world. The Greek God Asklepios was co-opted by the Romans along with his daughter, Hygeia (from whom we get the word "hygeine"), and his followers would present representations of the body parts they were concerned with, some inscribed as the the one above which says "Tyche [dedicated this] to Asklepios and Hygieia as a thank offering."

Other examples of votive offerings include ears

and mouths
and even placentas for those worried about safe childbirth. 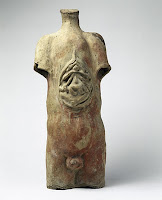 In some cases entire torsos were presented complete with ﻿genitalia and internal organs.