Turn of the Century Health Fads 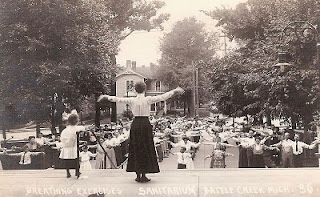 In the two centuries just prior to 1900 not only medical professionals, but ordinary people had taken an increased interest in new ways of maintaining their health. Spas had sprung up all over Europe and America, usually around natural sources of mineral water and hot springs. Here people went to seek cures for everything from infertility to rheumatism and paralysis. The methods used varied from curative waters to electroshock therapy, and typically included special diets and exercise regimens.

One such place was the Battle Creek Sanitarium which opened in Michigan in 1866. The name was a corruption of the word "sanitorium" which usually refered to a place of rest for soldiers. It was here that the Kellogg brothers started their "wellness institute" based on the health principles of the 7th Day Adventist Church. The Toasted Corn Flake Company follwed in 1906, and provided the basis of what would become the cereal empire we know today. Famous people who attended the sanitarium included May Todd Lincoln, Sojourner Truth, Amelia Earhart, C.W. Post (of Post Cereals), Henry Ford, and Warren G. Harding.