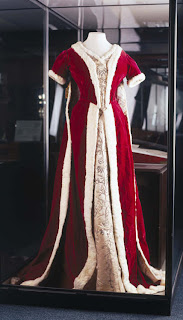 There were few occasions more harrowing for a Victorian lady than her presentation at court. Whether she was the daughter of noble or married to an officer in the Queen's service there were rigorous rules to be followed. Though the action of approaching the Queen, kissing her hand, and backing out of the room took only a few moments, the preparations leading up to the event took many weeks at least.
In addition to learning to make a full court curtsy with the knee almost to the floor, walking with a ten-foot train, and backing out the length of the room with said train; the guidelines over what was to be worn were extensive. White was the preferred color for dresses, but light colors would be worn and typically were by married women unless they had their wedding gowns adapted for this purpose. ﻿The style of the dress itself could vary dramatically from that being worn for other occasions depending on how recently court regulations had been updated to reflect changing fashions. Regardless, the dress was always to be low-cut, short-sleeved unless medically relevant, and topped off by a veil that fell to the train and was made of tulle with three large feathers perched precariously just to the left of the center, with the middle feather highest of all.
Tiaras could be worn by married women, and all carried small fans. In the summer these came in handy as the women waited, first in their carriages, and then crammed into the gallery waiting to be admitted to the Queen's presence. In the winter the women froze in the carriages and worse in the galleries where shawls, furs, or any kind of outerwear were forbidden.
After all of this the woman to be presented walked into the room where the queen, her entourage, and often some of her family, waited. She walked in her carefully-prepared glide to stand before her monarch, curtsied, kissed the Queen's hand (unless she was of the upper nobility in which case her forehead was kissed by the Queen), and then hopefully the valets in attendance would hand her the ten-foot train she was attached to so that she could gracefully back out the way she had come.