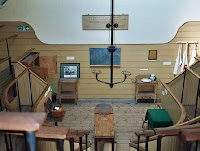 Medicine is such an interesting topic and I could easily make an entire series out of exploring what medicine was like throughout the ages, but that would be more like a book than a blog. In fact, just exploring one era would yield a whole books-worth of information, so instead I present to you a week of medically-related incidents through time.

Today we begin with the topic that led me to first examine the medicine and treatments of past ages; anesthesia. Pain is universal and the desire to lessen pain and suffering led early man to begin performing surgery, but this was fraught with peril even if the operation was a success because the trauma to the body from the stress and sensation of surgery could be overwhelming. The ancient Greeks used herbal mixtures to lessen the pain of surgery but this could not rightly be called an anesthetic. The word "Anesthesia" is Greek, meaning "without sensation", but the term was not coined until the poet and physician Oliver Wendall Holmes suggested it in 1846.

Holmes was responding to an amazing new technique he'd witnessed in Boston, when on the 16th of October a dentist named William Thomas Green Morton administered inhaled ether to a patient who then had a tumor painlessly removed from his neck. Prior to this some plant-based tropane alkaloids (opium, atropine) had been used, but they were very difficult to standardize and could easily overdose and kill a patient. In 1859 cocaine first reached the market where it was enthusiastically endorsed by none other than Sigmund Freud, who thought that it would help to wean people off of morphine.

Just after the discovery of inhaled ether anesthesia, chloroform was also developed in November of 1847. It's popularity grew rapidly after John Snow administered it to Queen Victoria in 1853 during the birth of Prince Leopold; but it quickly proved difficult to control and the first death attributed to chloroform anesthesia followed in January of 1848. This left morphine and cocaine and its derivatives as the chief forms of anesthesia through the turn of the century.