November 16, 2010
In 1929 two federal prisons were proposed to deal specifically with the treatment of drug addicts. Multiple factors had led to an increase in the number of addicts, estimated at 250,000. Amongst these were the return of soldiers after WWI who had brought with them drugs more easily attained in Europe, the Volstead Act which in outlawing alcohol drove people to other substances, and the Harrison Anti-Narcotic Act which severely limited the types of narcotics available for medicinal usage and who could prescribe them, which in turn led people to seek relief from less clinical sources intent on profit rather than relief. 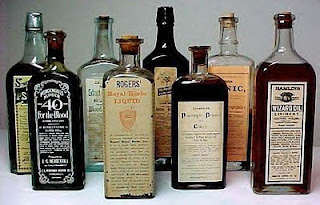 Statistics reported that 70% of cases began when victims were introduced to the drugs through associates who were either victims themselves or related to trafficking, 20% began as an attempt to alleviate pain, 5% through boredom and experimentation, and 5% through assorted other sources.
Doctors recognized three kinds of addicts. The "genius" who used drugs to achieve a new consciousness and relieve ennui was ultimately curable. The "hopeless delinquent" operated at a diminished mental capacity and even after being weaned off of drugs would be permanently unable to care for themselves. The third type was the "normal" addict, who usually began as someone seeking relief and would be able to return to a normal life once a less dangerous form of pain management was achieved.
The focus of the prisons was on patient care and reform rather than on punishment, and the methods used were threefold; to handle withdrawl, build up willpower and physical health, and create new habits and  practices to replace old ones.