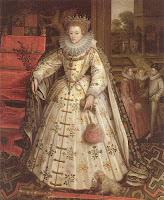 Last week's question was:- Edmund Spenser's poem The Faerie Queene was written as an allegorical work in favor of what monarch?

Sarah, it turns out, is quite the expert on the poem and she answered "The Faerie Queene was written in favor of Queen Elizabeth I, whose multi-faceted personality was represented variously as Una, Britomart, the eponymous Faerie Queene herself, etc...!"

Now onto the trivia for this week, and for this one we're reaching very far back:- What Roman Emperor was found dead on May 15th, 392 in Vienne, Gaul?