May 07, 2012
Trivia Monday got off to a good start with the question "What were the two styles of women's hoods prevalent at the court of Henry VIII?" An Anonymous visitor responded with the correct answer, which is the Gable hood and the French hood, as seen below respectively. 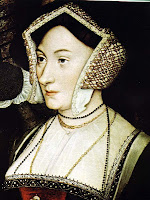 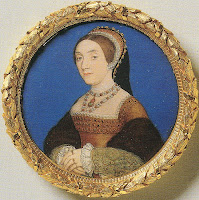 The Gable hood came first and was gradually replaced in popularity by the French hood, which was rumored to be a fashion brought back to England by the young Anne Boleyn, who had served at the French court.

On to the trivia question for this week:- Edmund Spenser's poem The Faerie Queene was written as an allegorical work in favor of what monarch?