The Songcatcher is set in 1907 and follows the experience of a female Professor of Musicology, Lily Penleric, who when once again rejected for tenure decides to visit her sister, Eleanore, who has a school in the wilds of Appalachia. Once there Lily discovers that the people of the region have handed down Old English ballads from generation to generation without adulteration by the outside world. She begins to collect these works by recording them on gramaphone cylinders and writing the songs out, but there are more than a few challenges to contend with. 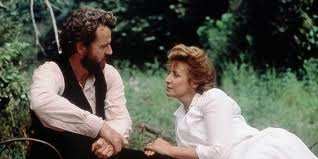 Viewers are not likely to recognize many of the actors in the film, with the exception of Aidan Quinn who plays a war veteran named Tom Bledsoe. He is initially very suspicious of Lily, and their relationship gets off to a rocky start, but soon becomes just what you expect. Things you might not expect include; Lesbianism, stripping naked while running from wild animals, cars driving up the mountains, and Bible-tent murder.

The screenplay was written and directed by Maggie Greenwald, for whom this was her best-known film. I found it at times very predictable with a lot of stock characters, like Earl Giddens, the representative of a Coal-mining firm that wants to buy everyone's land, and the ending was exactly what I was expecting from the start.

Having said that there were some things that I very much enjoyed about the film. It was not another Edwardian comedy of polite society, and the plaintive songs were just what I was craving when I selected the movie. I liked that Lily never entirely became just one of the mountain folk, that would have been too easy and wrong for the character of someone who has struggled her whole life for professional recognition; but she did bring a perspective of value to something which they took for granted almost, and that in turn gave her a certain standing in their community.

In short, don't watch this film for it's award-winning performances, there aren't any. Watch it for a story more rarely told, and music beautifully and realistically rendered.