October 03, 2011
Back on the Tudor Gown post I mentioned that while I was waiting to get new fabric for that nightmare of a misadventurous project, I had something else to work on- the Gray Elizabethan Men's Project. This fits into my attempt to finish all of the unfinished things sitting around my house because both the doublet and breeches have been cut out for about six years. 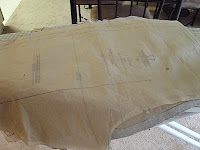 It started as part of an entire wardrobe I was making for a friend back in 2005, but after doing four complete costumes he really didn't need a fifth, so this one stayed in my sewing stash waiting to be finished. The problem with trying to sew something you cut out that long ago is that you no longer entirely remember how you were going to make it look. Fortunately at the time I was altering a commerical pattern to be (more) historically accurate, and I still remember how that pattern used to go together. 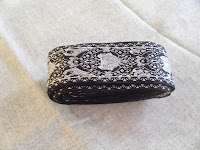 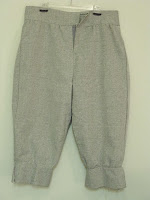 The breeches were made of a slightly mottled gray linen. From the photos it looks like a sweatshirt knit, but I promise it isn't. I started out by putting the pieces together, and estimated an appropriate waist measurement, since the top is gathered to a waistband. The pants are self-lined in gray linen as well, making them very dense. Initially I planned to do this because they would be worn while fencing rapier. 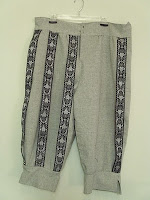 Once they were near to complete with only the waist and leg bands to turn and finish, and the buttons and buttonholes to add, I started placing the trim. I chose to pop the seams at top and bottom so that I could press the pleats into shape beforehand and have them stay in place. The trim was only attached top and bottom, and floats freely over the leg. 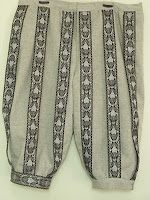 After sewing back the popped seams I finished the waist and leg bands, leaving an overlap for the buttons at the legbands and center front. I then stitched on the same trim I'd used previously, this time covering the entirety of the bands.

Finally, I attached the buttons and made buttonholes. The whole project was done by machine where able, as I intend this to be more of a costume than a recreation. Next up...the doublet!