This Day In History- The Portuguese Revolution 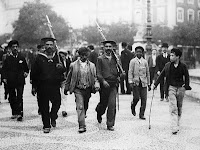 October 5th, 1910. It seems like it should be the first rule of preventing revolution; do not let the military change sides. It happened in France, it would happen in 1917 in Russia, and it happened in 1910 in Portugal.

King Manuel II was in charge, but his political counterpart, Prime Minister Joao Franco was compelled to step down and go into exile, necessitating a new election. Unfortunately the void was not quickly filled as different political factions fought each other. In the midst of this struggle came a visit from the president of Brazil, which only provided further incentive for republican demonstrations.

As if things could not become more tumultuous, several of the warships anchored in the Tagus River broke into mutiny. Orders from Lisbon to put down the mutiny were ignored, and the ships took up position around Lisbon, causing the royal family to flee for their lives to Britain. With the king out of the way, a provisional republican government was finally formed, and elected Teofilo Braga, a writer, as president.

Eventually this First Republic would dissolve, like the the First French Republic before it, into a dictatorship, paving the way for further revolution.