The House of Worth

October 12, 2011
These days when many of us go clothing shopping we are liable to end up in a large department store surrounded by ready-made garments, perfumes, jewelry, shoes, and even housewares and furniture; but in the 19th century this was far from the experience of most shoppers.

Clothing then was still an individual creation for the most part. Magazines like Harper's Bazaar, La Mode, or Godey's showed illustrations of costumes (complete with hats, undergarments, and hair extensions and accessories) that could be ordered to be made, but going into a store still involved simply looking at fabric to be made into clothing.

This began to change in the late 1850's. A man by the name of Charles Frederick Worth was working as a draper in a dress shop called Maison Gagelin. He first introduced the idea of not merely swathing models in fabric for the customers to look at, but creating whole muslin outfits so that they could see the cut and decoration of something before choosing a fabric to make that same costume. His designs were soon amongst those on display at the shop, and despite their novel and (for the time) daring departure from accepted styles, won a gold medal for Gagelin.

It wasn't long after that when he opened his own fashion house. He also started the practice of sewing labels with his brand into the garments that were made. This is part of how we know so many examples of his work today, and also because a gown from the House of Worth quickly became the absolute height of fashion, and anyone who was anybody had to have them.

He kept the tradition of using live models, but rather than draping them in fabric, or showing them in muslins, he moved to having shows at his atelier where they would model actual garments in full fabric and decoration and with appropriate accessories, all available for the patrons to have made in their own size and with their personal modifications if desired. His was also the first fashion house to offer perfume, and commissioned the famous glass-maker Rene Lallique to design a bottle to showcase it. The modern perfume industry was thus born, and more scents followed; though "Je Reviens"(1932) remains the most popular to this day, thanks in part to soldiers during WWII who likes to give it to their sweethearts, probably because it means "I will return".

The House of Worth remained a leading style icon until 1956 when the firm was closed following it's sale by Charle's great-grandson. In more recent time, however, it has had a resurgence under new designers and a renewed interest in this once-innovative legacy. Worth gowns can be found in nearly all of the great museums of the world, and their decorative techniques, tailoring, body-conscious cut, and refined elegance make them timeless works of art. Charles Frederick Worth earned his title as "The Father of Haute Couture". 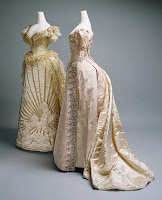