This Day in History- John Gerrard's Escape from the Tower 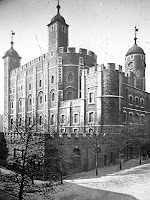 I love a good prison break story like "The Shawshank Redemption", or "The Count of Monte Cristo", but sometimes the best stories are the true ones.

In 1597 a Jesuit missionary named John Gerrard was imprisoned in the Tower of London for all of the usual reasons; plotting against the queen, being the wrong religion etc. Tortured for four days by being hung from his wrists via chains, he steadfastly refused to name his co-conspirators, or even admit there was any kind of conspiracy. Taken down, finally, he was determined to escape.

First he knew that he would have to regain the use of his hands, which had been rendered immobile by the torture. He bribed his gaoler to bring him some oranges, which he squeezed, peeled, and ate. For three weeks he exercised his wrists by cutting the peels into small crosses, which he strung on a silken thread to make a rosary. Why squeeze the juice out, though?

He requested a piece of paper with which to wrap the rosary so that he could send it to his friends, and duly this was brought. A few words were written on the paper in charcoal, enough to ensure its delivery, and on the inside he used the juice from the orange to write an invisible message detailing his escape plans so that his friends would be ready to help him. He gambled that they would know to hold the note up to the fire, rendering the words visible.

His last preparations were to convince his gaoler to let him visit another Catholic prisoner who was held in another part of the prison known as the Cradle Tower, which was only across a moat from the lowest part of the outer wall.

On the night of September 9th, 1597 Gerrard and his companion waited on the inner wall, and in due course a small rock came sailing over the wall attached to a string. They pulled up the string, which was attached in turn to a rope which they secured inside the wall so that it stretched across the moat. With great difficulty, because of his weakened wrists and hands, Gerrard made his way across the moat to the top of the wall and descended, successfully effecting his escape.