Film Review- To Kill A King 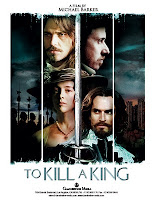 "To Kill A King" is a film set in that rather under-represented era in English history, the Civil War. It details the relationship between Lord Thomas Fairfax, who has helped to lead the overthrow of King Charles I, and his deputy, Oliver Cromwell. The two commanders seek to implement a more egalitarian government, but almost from the start are at odds about how to achieve this, and what the new government should be.

Muddying the waters somewhat is the relationship that each man has with Fairfax' wife, Lady Anne. She's of noble birth, and she and her father don't make her husband's political decisions any easier. Neither does the fact that Cromwell, at least in the beginning, has a not-so-secret desire for the lady, though he himself is married.

Tim Roth gives an impassioned performance as Cromwell, the man history loves to hate, although his relative youth in the film did puzzle me a little as he would have been 49 when the majority of the events depicted took place. High marks go to costumes for managing to include even Cromwell's noted moles in all of the right places. His friend, Fairfax, who both in the film and in real life refused to sign the King's death warrant, is our protagonist played by the brooding Dougray Scott (Ever After).  He does a great job portraying a man torn in many different directions at once, who has to choose not only between his King and his politics, but also between his wife and his friend, his safety and the safety of others, his wealth and his beliefs, and finally between everything he wishes to protect and his own life. The friendship between the two men his made warm and real, and the complications that beset them are as much about the breakdown of that relationship, as they are about the future of England.

Strong marks go to the fast-paced nature of the story, which easily could have gotten bogged down with historical intricacies; however, the lack of clarity about these situations means that a strong understanding of the time period and politics is advisable. Rupert Everett, as King Charles I, manages in the few scenes that he's in to show us the full transformation of a man from Absolute Ruler to prisoner, defiant defendent to humble martyr. He's also far from archetypal as we see him scheme, threaten, and bait his opposition. It gives the audience an opportunity to feel equal disbelief that such a man could be so easily overcome.

Finally, I cannot end without mentioning the period-perfect Olivia Williams as Lady Anne Fairfax. Her looks are very like those of 17th-century portraiture which, added to her pitch-perfect performance, creates a character that is sympathetic and believeable. Her sorrows, fears, and bewilderment, caught between the machinations and expectations of many men are reminiscent of Ophelia in Hamlet, yet this is a woman with power and persuasive abilities of her own.

All in all, a good film and a welcome one. There are too few 17th-century movies out there, and this one is worth seeing.