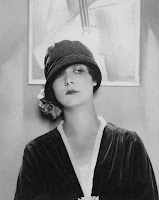 Cloche is french for "bell" and the cloche hat of the 1920s was shaped just so. When one thinks of that era it is one of the most pervasive styles and the first to come to mind for me. They could be any color, and made out of velvet, felt, wool, straw, or even knitted, trimmed with flowers, bows, buttons, feathers, pretty much anything you can think of!

Strictly a day-wear item at first, they showed up in films, fashion plates, and advertisements, and many were in fact made specifically to match certain outfits. Invented by a milliner named Caroline Reboux in 1908, they continued in popularity until about 1933 and were sported by stars, socialites, and celebrities as well as regular working-class people and, of course, flappers.

In more recent years the cloche has made a comeback and versions for both day and eveningwear can be found everywhere from Etsy to in-store at Target and Macy's. This is one style that is far from gone. 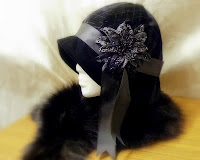