March 15, 2011
My, but I am tardy in posting! Forgive me, dear readers, it is a combination of several shows going up at once, my wedding preparations, and having to move within a month that has me so preoccupied. 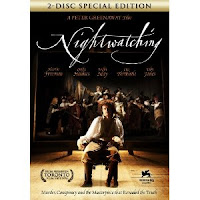 I caught an interesting movie last night called Nightwatching. In sort of the same vein as Girl With a Pearl Earring, it follows Rembrandt as he paints his famous portrait "The Night watch", more accurately known as The Company of Frans Banning Cocq and Willem van Ruytenburch. 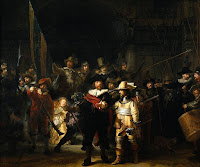 The film suggests that Rembrandt found out about a plot between the members of the militia he was convinced to paint, and inserted various clues as to the crime, as well as the dirty little secrets of each member, into the painting itself. This leads those involved to work against Rembrandt in such a way that it brings about his personal and professional ruin.

Naturally the movie involves a lot of conjecture into the personal lives of the artist and his associates, their personalities, sins, and relationships. It seems to center, apart from the militia plot, upon the sexual and romantic relationships of Rembrandt, and the life of a young girl who shows up on his rooftop from time to time.
If you are looking for an upbeat movie, this is not it.
If you are looking for something easy to follow, this is not it.
If you are looking for a family-friendly film, THIS IS NOT IT.
The plot, not to mention the subplots, are all a little hard to follow, made harder by the artistically-focused direction of the film, which at times seems far more like a theatrical production (complete with a giant bed on wheels). The other surprising thing is that the movie doesn't end with the painting's completion, nor with it's critical reception, or even with the completion of the various subplots. A while after the painting was finished and presented the movie kept going, and my fiance decided to check how much time was left- 40 minutes. As it turned out it was largely 40 minutes of sex, in various positions and with varying levels of brutality, so if that and adult language turn you off, then you probably won't enjoy the movie.

The artistic side of the movie is actually quite intriguing, set, as it is, almost like a theatrical piece, with the chiaroscuro of Rembrandt's own works; which oddly enough went out of style almost as soon as The Night Watch was finished, part of what led to the painter's decline.

I give it a mixed review. I was interested enough to watch it once all the way through, but I doubt if I would do so again. If any of you have seen this film I'd be interested to hear your thoughts on it.