March 22, 2011
As I've mentioned before, I work in theatre, and sometimes that extends to film and television. Occasionally I meet or hear of someone who believes that a job in the arts is full of fun and ease, after all it's just pretending, right? The truth, of course, is that there are some long hours, extreme conditions, and unexpected requirements involved, so you have to be prepared for anything. 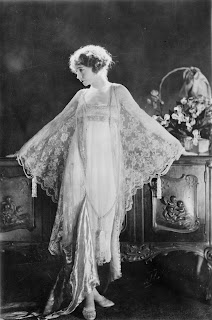 In 1919 actress Lillian Gish (pictured above), began filming Way Down East with director D.W. Griffith. The movie was later hailed as "the greatest ever made", and featured scenes shot on an actual ice flow in blizzard conditions. Below is Ms. Gish's own account of what it took to shoot those moments.

"Mr. Griffith intended to shoot all the exterior scenes outdoors, including the blizzard. He wouldn't be satisfied with the fake fury of a studio storm.

For the climax of the movie, where Anna was to be driven out into the blizzard, stumble onto the river's ice, and faint, I tried to get into condition early with exercise, walks in winter gales, and cold baths.
The blizzard finally struck in March. Drifts eight feet high swallowed the studio. To hold the camera upright, three men lay on the ground, gripping the tripod legs. A small fire burned directly beneath the camera to keep the oil from freezing.

Again and again, I struggled through the storm. Once I fainted - and it wasn't in the script. I was hauled to the studio on a sled, thawed out with hot tea, and then brought back to the blizzard, where the others were waiting. We filmed all day and all night, stopping only to eat standing near a bonfire. We never went inside, even for a short warmup. The torture of returning to the cold wasn't worth the temporary warmth. The blizzard never slackened. At one point, the camera froze. There was an excruciating delay as the men, huddled against the wind, tried to get another fire started. At one time my face was caked with a crust of ice and snow, and icicles like little spikes formed on my eyelashes, making it difficult to keep my eyes open. The temperature never rose above zero during the three weeks we worked there."