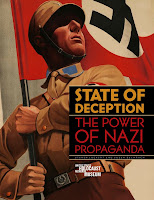 (Photo courtesy of the United States Holocaust Memorial Museum)
I was driving past the Holocaust Museum in D.C. today and I noticed that they have an exhibit up called "State of Deception: The Power of Nazi Propaganda". I keep meaning to visit the Holocaust Museum, but every time I consider it I seem to shy away on the basis that it just never feels like the right time to experience the sensation of being kicked in the gut, the irrational guilt, and likelihood that I'll cry in front of complete strangers. It's not a place that was built to inspire laughter or good feelings.

It is however the kind of place to go if you've ever wondered, as I have, how on earth it was that one man, or one political party, could convince so many people to carry out a ghastly plan of annihilation towards so many of their neighbors, countrymen, and fellow human beings. How does a failed painter get seemingly normal citizens to put children into gas chambers? It just seems impossible, and yet we know it happened.

This is the kind of question that the exhibit is intended to address. In the words of the Washington Post's reviewer, Philip Kennicott "In many ways, "State of Deception: The Power of Nazi Propaganda" feels like an introduction to Holocaust Museum 2.0. The $3.2 million exhibition is one of the largest and most ambitious in years, and certainly the most technologically slick in recent memory. By taking on the subject of propaganda, the museum is taking on the whole of the Nazi project, retelling the story of Hitler's rise to prominence, his consolidation of power, his ideology and his wars, and the aftermath, including a substantial look at how propaganda and genocide remain linked in places such as Rwanda." As someone who has studied the atrocities in Rwanda, and remembers the odd disconnect between knowing what was going on, yet watching the world stand by, I am pleased to see that, though this is a museum piece, it still reaches out and finds relevance in the world at large.

For the full review and more information about the exhibit you can visit the Washington Post's site here.