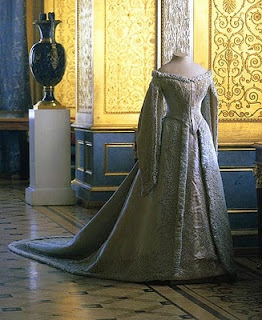 I am getting married in July and while I bought something off the rack close to what I wanted, I am making several changes to it to make it more my own. The finished gown will be partially inspired by the court gowns of Russia in the early 20th century, like the one above worn by Empress Alexandra. 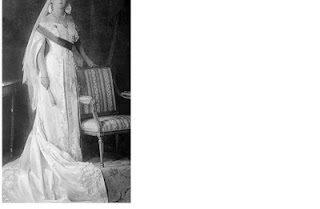 Some of the best examples of this type of gown come from the portraits and photographs of the Grand Duchesses of Russia, of which there were many. This picture of Olga Nicolevna is a good example of the general silhouette, complete with sash and hanging sleeves. 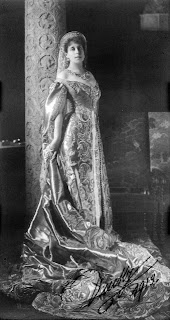 In this photo of Victoria Mellita the sleeves are even more prominent and she stands swathed in an enormous train of what looks like heavy satin with some extensive embroidery. My gown has a much softer, organic embroidery with beading on it's overlay, and the train is comparatively short. 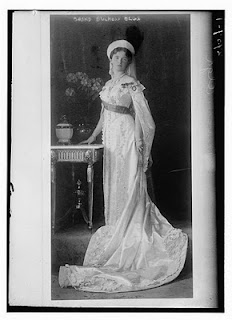 Here is Grand Duchess Olga, daughter of Nicolas II and Alexandra, looking simultaneously like a lady and a child in 1910 when she would have been 15 years old. 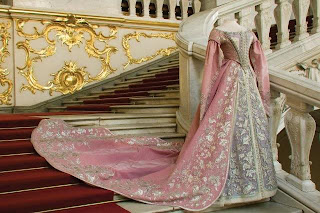 Lest you think that dresses had to be white, here is a little color. This gown is likely from the 19th century, but the official court style changed very little over time, the hanging sleeves being the most distinctive feature for women.

While most of these feature a pointed waistline and probably a separate skirt, my wedding dress has an empire waistline with heavily-beaded sash, and a fit-and-flare, or trumpet, silhouette. I think it's going to be beautiful, I just need to get the beaded lace to my seamstress for those sleeves!