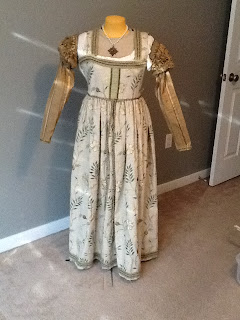 It's done! I ask your indulgence for the fact that the outfit does not entirely fit the form, as I myself am very small and still need to carve it down a bit to make the form me-sized. Until we have a reliably sunny day (maybe this week?) I won't be able to put it on and take nice photos outside.

The project took about 18 days to accomplish and was machine-sewn except for where the stitching would show. The time crunch required it. The pattern was adapted and draped in places, and straight out flat-patterned in some areas. The bodice is corded with hemp cording, which can be found at most craft stores, or even with the garden supplies. The material is linen with some silk taffeta for the sleeves, and a cotton chemise. 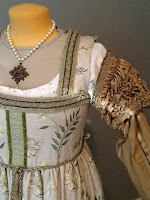 Future photos of the gown on an actual person will prove that the sleeve doesn't fit half so awkwardly as it appears to in this photo (grrr). As the research images appear to show, the gathered sleeve and the straight sleeve are made as two separate ones and only joined at the sleeve head. I used, as I recall, six gathering stitches and the fabric was 45" prior to gathering. Next time I think I'll either gather it less tightly in the middle section, or use a longer strip so that it's more full. You can also see the pearl necklace with pendant that I put together for the outfit. I wore it with a set of dangling pearl earrings as well, and an "emerald" ring. 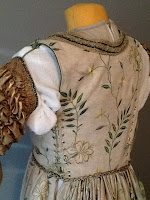 The back of the gown shows the side-back lacing, which is featured in some great Italian paintings of the renaissance. I gathered the trim at the back neckline as I was stitching it on, just slightly, so that it would take the curve better. The sleeve is only attached to the bodice via one ribbon tie at the shoulder, and is left free under the arm, front, and back for ease of movement. 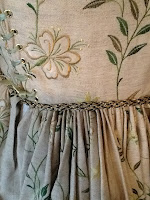 I was really pleased with how my cartridge pleating came out on the skirt back. I pleated the underskirt with standard "divide-and-conquer" pleating so that there would be a flat section in the front (to avoid that all-too-common divot, you sometimes get); but I gathered the front of the gown skirt (54" into something like 19", I believe) and had to get 108" into 7.75" which necessitated cartridge pleating. Considering that this is a technique which I rarely have cause to use, I was pretty happy with the result and it feels very secure. 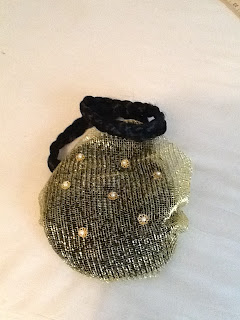 The last thing I have to share is the hairnet which I made from some gold net material, studded with gold roundels and pearls, and stuffed full of fake hair. I then attached another long strand, which I braided, and wound it around the top of the hairnet and my head. Pinned in place it was hard to distinguish from my own hair, which was twisted at the sides and then pulled back and stuffed into the hairnet as well.

My shoes were ruined at the event as it was soggy and they started to warp and the woven material split over the canvas lining at the toes. C'est la vie, perhaps it will give me an excuse to do a post on fixing such problems.

The De Berry Project- The Fabric and shoes

June 16, 2014
As I mentioned last time I am working on a version of the outfit to the left for an event coming up soon in July. I wanted something with a hat to shade my face, and not too hot since we are going to be outside in the middle of a Virginian summer.

The fabric gods were not kind, when I went to my local fabric stores. There was really nothing in the right weight, color, pattern, fiber, or amount; especially the amount since I need about 8 yards for the undergown and 10 yards for the overdress. Part of the problem is that there are no waist seams, so each piece has to be cut from a long continuous length of material. Also, those sleeves are about four yards by themselves. I resigned myself to ordering online, which I hate doing because it's so hard to be sure of the color etc without seeing it in person, and by the time the fabric arrives often there just isn't time to send it back and get something else.

I went first to an oldie, but a goodie; Thai silks. I knew they would have…
Post a Comment
Read more