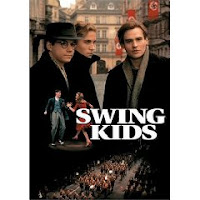 Swing Kids, starring Robert Sean Leonard, Kenneth Branagh, and Christian Bale amongst others, is a film about the pro-jazz, non-conformist youth of Hamburg, Germany at the start of WWII. Contrary to the pressure to be nationalistic, somber and join the Hitler Youth these hipsters embraced American fashions, Swing, and a certain "joie de vivre" that authorities found unsettling, even dangerous. In the film, a group of friends finds themselves challenged by prejudice, familial pressures, and their own still-developing sense of morality. Each one makes a choice, but do those choices bring them closer together or tear them apart? 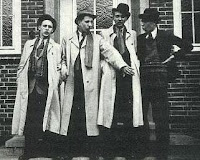 I'm not going to answer that for you, you'll have to watch it for yourself. Be assured that the movie has lots of thrilling swing dance scenes with high-flying aerials (acrobatic moves), jumping music, and plenty of the pathos for which the main actors are well-known. Robert Sean Leonard, in particular, is brilliant as a kid named Peter whose father died after enduring harsh interrogation for his supposed Socialist views. Peter's widowed mother is not eager to lose her son as well, and Kenneth Branagh is only too eager to help her and her family through his Nazi governmental ties. It begins with a party and ends with a party, but the in-between is anything but joyful. If you liked Dead Poet's Society you will likewise enjoy Swing Kids. You know what's going to happen from the start, but like a great piece of music, you've got to listen to all of the notes.