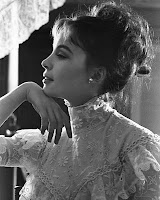 One might very well start a discussion of movies set at the turn of the century with A Room with a View, and I do love that film, but today I want to introduce you to a lesser-known classic Gigi. Starring Leslie Caron, Maurice Chevalier and Louis Jourdan,  it was directed by Vincente Minelli with a script and score by the famous Lerner and Loewe duo. 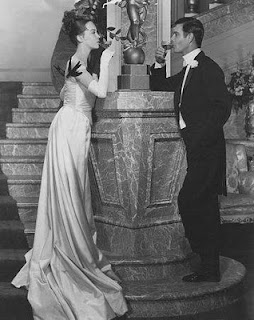 The story begins with Maurice Chevalier as an old "roue" (playboy) named Honore singing the charming "Thank Heaven for Little Girls" as he points out polite society promenading in Paris, and the young girls playing in the park. Among them is Gigi, who runs off to her grandmother's apartment where she lives with her mother. Unbeknownst to Gigi she is being groomed by her Aunt Alicia to become a courtesan, as Alicia was, and her grandmother, Mamita, once dated Honore. Honore's nephew, Gaston (Jourdan), is a close friend of Mamita's and spends considerable time with her and Gigi when he is not romancing various women. Over the course of the film Gaston and Gigi's relationship goes from that of playful siblings to budding romance.

Finally Gaston finds that he must choose between Gigi's reputation and his own desires; but never fear, all ends well as we rejoin Honore on the promenade in Paris. This 1958 color film is a beautiful and fast-paced classic filled with gorgeous costumes and light-hearted music. Some may find it predictable, but it is nothing if not entertaining.