The 17th Century- A Letter from Madame de Sevigne 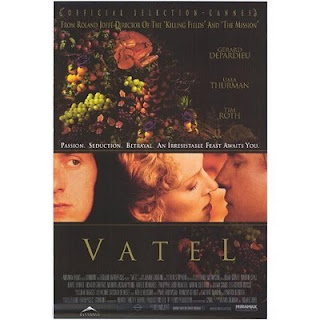 Some of you may be familiar with a movie that came out some time ago called Vatel﻿. Starring Gerard Depardieu, Uma Thurman, and Tim Roth, it's about a very famous 17th Century cook of the same name who (spolier alert) commits suicide after a grand feast for the visiting King, Louis XIV, goes partially awry. In the movie there is a lot more to it than that, but the film was based on true events.
In a letter to a friend Mme de Sevigne recounted the events as they ocurred in April of 1671:-
"It is Sunday, the 26th of April; this letter will not go till Wednesday. It is not really a letter, but an account, which Moreuil has just given me for your benefit, of what happened at Chantilly concerning Vatel. I wrote you on Friday that he had stabbed himself; here is the story in detail.

The promenade, the collation in a spot carpeted with jonquils - all was perfection. Supper came; the roast failed at one or two tables on account of a number of unexpected guests. This upset Vatel. He said several times: 'My honor is lost; this is a humiliation that I cannot endure.' To Gourville he said. 'My head is swimming; I have not slept for twelve nights; help me to give my orders.' Gourville consoled him as best he could, but the roast which had failed (not at the king's, but at the twenty-fifth table), haunted his mind.

Gourville told Monsieur le Prince about it, and Monsieur le Prince went up to Vatel in his own room and said to him, 'Vatel, all goes well; there never was anything so beautiful as the king's supper.' He answered, 'Monseigneur, your goodness overwhelms me. I know that the roast failed at two tables.' 'Nothing of the sort,' said Monsieur le Prince. 'Do not disturb yourself, all is well."
Midnight comes. The fireworks do not succeed on account of a cloud that overspreads them (they cost sixteen thousand francs). At four o'clock in the morning Vatel is wandering about all over the place. Everything is asleep. He meets a small purveyor with two loads of fish and asks him, 'Is this all?', 'Yes, sir.' The man did not know that Vatel had sent to all the seaport towns in France. Vatel waits some time, but the other purveyors do not arrive; he gets excited; he thinks that there will be no more fish.

He finds Gourville and says to him, 'Sir, I shall not be able to survive this disgrace.' Gourville only laughs at him. Then Vatel goes up to his own room, puts his sword against the door, and runs it through his heart, but only at the third thrust, for he gave himself two wounds which were not mortal. He falls dead.

Meanwhile the fish is coming in from every side, and people are seeking for Vatel to distribute it. They go to his room, they knock, they burst open the door, they find him lying bathed in his blood. They send for Monsieur le Prince, who is in utter despair. Monsieur le Duc bursts into tears; it was upon Vatel that his whole journey to Burgundy depended. Monsieurie Prince informed the king, very sadly; they agreed that it all came from Vatel's having his own code of honor, and they praised his courage highly even while they blamed him...

Gourville, however, tried to repair the loss of Vatel, and did repair it. The dinner was excellent; so was the luncheon. They supped, they walked, they played, they hunted. The scent of jonquils was everywhere; it was all enchanting."