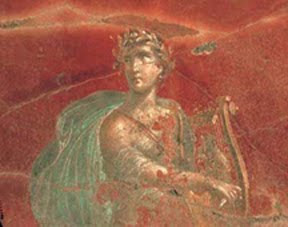 Deservedly or not Emperor Nero gets quite the bad rap, but there were kinder depictions of him. A man who saw himself as an artist (read: actor, musician, and all around performer). Some his final words are reported to have been a line from the Iliad, and "What an artist dies in me!" Though it has been likewise said that he "fiddled" while Rome burned, there is little to suggest that this is anything but rumor.

It is therefore not surprising that in Moregine, just south of Pompeii, also preserved by the eruption of Vesuvius on August 24th 79AD there is a fresco of the Emperor Nero as Apollo Citheroedus, the God who inspires aethetic and artistic gifts in man. The unsurprising part is that the fresco is found in the home of a weathy patrician family, which most likely would have supported the emperor in his early years. The surprising part is that Nero deviated so drastically from his predecessors and their focus on militaristic propaganda as to be depicted primarily as a peaceful, artistic archetype.

In a political climate in which it was almost mandatory that a proper roman leader endorse expansionistic policies, the military and diplomatic successes of Nero were overshadowed, or at least under-exalted, to the point at which the elite classes began to consider him weaker and "un-Roman". This eventually led to attempts to replace him with military leaders, and finally his own suicide.

Perhaps despite the historical accounts, his true failing was in being different at a time and place when that was not readily-accepted. We may never really be able to accurately judge.