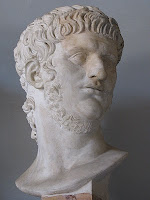 The life, controversies, and rumors associated with the Emperor Nero would take many posts to encompass, but as yesterday was the anniversary of his death let us focus on that at this time.

It was a suicide, or so history concludes. The reliability of some accounts has been called into question by historians, but one thing is for sure, death was coming for Nero because due to revolts in the provinces, disaffection amongst the Roman legions, and a drastic loss of favor with the senate he was declared a public enemy and was sentenced to be beaten to death.

Knowing full well the gravity of his disfavor Nero weighed the choices of fleeing to the provinces which may or may not have supported him, taking his own life, going into hiding, or appealing to the people to restore him to power. Waking at his palace during the night of June 8th he found that both his guards and his friends had deserted him, and he determined to flee with four loyal servants to a villa outside the city. There he ordered them to dig a grave for him, but lost the nerve to end his own life. When word of his sentence arrived he finally drove a dagger into his throat with the help of his secretary Epaphroditos. A pursuing horseman arrived and attempted to staunch the bleeding, but with the words "Too late, this is fidelity!" Nero died, bringing to an end the Julio-Claudian dynasty.