April 22, 2012
We kicked off our honeymoon tour with three days in Venice, which turned out to be the best part of an overall lovely trip. We'd attempted to learn some Italian before going, as I always feel badly about asking people to speak my language in their country, but between work and the whirlwind that was wedding planning we just didn't get that far and ended up having to rely on others to understand us much of the time. 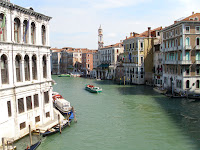 Arriving on a Wednesday afternoon at Marco Polo airport we caught a bus from the mainland across the bridge to the Piazzale Roma, which is the main depot for people arriving or departing Venice by bus, boat, or train. I'd heard from a few people who had traveled to Venice previously that there could at times be a strange smell from the canals, but the only thing I noticed was the smell of water, which I love. The red-tiled roofs of the Piazzale Roma were very pretty, and despite it being very crowded we had no trouble purchasing a Vaporetto (water bus) card and catching a ride to the stop nearest to our hotel. The views of the Grand Canal were wonderful even during such a short ride, but then it was our first visit so we were delighted just to be there. 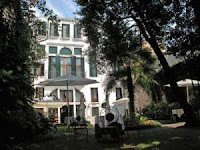 The weather for almost the entirety of our stay was beautiful, with temperatures moderately warm, but not too hot, and sunny skies and a light breeze. Perfect. One of the wonderful things about Venice is that it is such a small city that it's hard to get lost, I mean, eventually you will always run into water, and from there you can easily find your way. We had no trouble finding our hotel, although the small alleyway leading to it from the main street was a little dark and graffiti-marked, and when we passed through the big wooden doors and found ourselves in the private garden we were entranced. 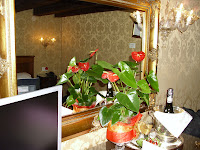 The Palazzo Abadessa, where we stayed, was situated away from the main tourist areas near the Rialto Bridge and Piazza San Marco, so it was very quiet and in the mornings we awoke to the chimes from a nearby church. This the kind of experience Americans dream of when traveling in Italy, possibly because that kind of old-world charm is hard to find here. Our room was comfortable with wood furnishings, Venitian damask on the walls, Murano glass light fixtures, and a large modern private bathroom. The floor was parquet with, best of all, a double set of doors that opened onto a balcony overlooking the garden. Since the room was located on a corner with the bathroom facing perpendicular to the balcony we got a lot of light, and liked to have the doors open when we were in residence. When we arrived we were greeted with great warmth by our concierge, Darwin, (my first attempt- and failure- at using the Italian I had learned) and found prosecco and sweets awaiting us in our room. Breakfast was part of our hotel package, and the food was very good, with beverage service provided by the hotel staff, and we ate in the garden every morning to the sound of bells, birds, and children playing nearby; except for the morning that the kitchen staff were playing old american doo-wop classics, but that just amused us all the more.

Naturally the first day we spent exploring the usual tourist attractions; Piazza San Marco, the Doge's Palace, San Marco itself, and the Correr Museum. My husband and I are both very interested in history, so our itinerary really focused on historic landmarks and museums. We loved the Roman statuary, maps, coins, chopines (!), paintings, and enormous globes at the Correr Museum, but as with many of the places with visited we could neither take photos (which is completely understandable) nor were there postcard photos or photo-heavy books available for purchase, so our memories of the items in the collection will have to suffice. 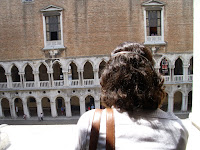 We were not permitted to take photos inside the Doge's Palace, but we could take one from the palace looking out onto the courtyard. Fortunately, the internet is also a pretty good source for images of the inside. There was so much beauty in the palace that it would be impossible to tell you all about it in one post, much less a post shared with so many other sites, but below are some of our favorite features.

The first night we had sought out the old Jewish Ghetto and a highly-recommended pizza place where my husband tried a horsemeat-topped pizza (it was kind of smoky), then we went back to the hotel and indulged our jet-lag. The second night we dressed up nicely and went to a more upscale seafood restaurant, where we sat outside and tried things we'd never had, couldn't identify, and which were probably swimming that morning. Now, I may not speak much Italian, but my French is pretty decent. When we went to ask for the check I was having trouble remembering how to say it, and I said to my husband that I knew it wasn't similar to the same phrase in French or I'd remember it better. He then asked me what it was in French and I told him, whereupon the man sitting at the table next to us, whom I'd already heard to be speaking French to his companion, said to her in French "That's probably all that American knows how to say." I always feel that people are ambassadors of their countries and cultures when we're abroad, so I try to be as polite as possible. It therefore bothers me when other people are rude, but I like to think that they are not representative of the majority of people.

After our dinner we ran a few streets over to enjoy an evening of opera arias, performed in an 18th-century building by singers and instrumentalists in 18th century costume. That made a lovely end to our evening. Sadly we had assumed that no photos could be taken and left our camera at the hotel, when in fact we could have.

The next day Darwin arranged for a water taxi to take us to Murano, the glass-making island, where we took a tour of a forge and bought some souvenirs for our parents and ourselves, then it was back to Venice proper, where we had fun getting lost, and eventually found our way to the Naval History Museum, where we could take photos.

Finally we walked over to the 18th century museum which is housed in the Ca' Rezzonico. Trust me, if you want to know how the super-wealthy lived in 18th century Venice this is the place to go. From the grand marble staircase to the views of the canal, the perfectly preserved decor to the original 18th-century furnishings, it is a complete trip back in time. Sadly, once again, neither photography nor any photos for sale, but again we turn to the internet to solve that problem.

We enjoyed some streetfood (and about our third helping of gelato), but were just too tired from walking around to make it to anymore museums, even though it meant missing the Costume and Textiles museum at Ca Mocenigo. It's good to leave something for the next trip. The next day we rolled our suitcases back to the Piazzale Roma and took the train from there to the cruise port to catch our ship, the Norwegian Jade, for the next leg of our journey.