Shakespearean Epic Miniseries to Air in the USA 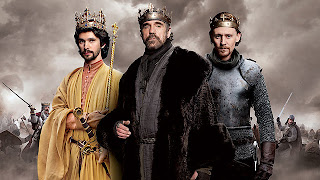 Wouldn't it be great if someone took four of Shakespeare's history plays, say Richard II, Henry IV (parts 1 & 2), and Henry V, and made them into one epic miniseries? Well, BBC Two has already done that for you in a series called The Hollow Crown, and now we can look forward to finally seeing it in the USA...but not until September.

For those of you, like me, who may be chomping at the bit I give you an article on the costumes to peruse here, as well as some more lovely and familiar faces from the cast....


and finally the trailer, just to get you really excited.