Gruesome Tales From History- The Vengeance of Brian Boru 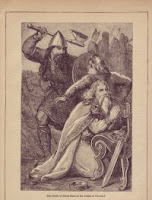 The facts surrounding the Battle of Clontarf in 1014 are a bit muddled, surrounded by legend and much historical re-writing over the centuries; but one thing is clear, that Brian Boru, High King of Ireland did die. Perhaps not in battle, perhaps as the outcome of a terrible treachery, but die he did and the vengeance taken on his behalf is not for the faint of heart.

According to one version of the story, having retired to his tent to pray during the battle King Brian was surprised by two Danish mercenaries fleeing his victorious troops. One of them, Brodir, felled the king, but was himself captured not long after. His punishment? His abdomen was cut open, his entrails attached to a tree, and he was forced to walk around the trunk until they were completely unwound and he expired.