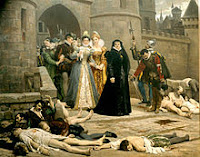 Last week I asked:- "What bloody event, following the wedding of Marguerite de Valois and Henri Roi de Navarre, is depicted in both "La Reine Margot" and "Princesse Montpensier"?"

Isis correctly answered that it was the St Bartholomew Day Massacre.

This bloody event occurred  in 1572 beginning on August 23rd, but extended for weeks. Tensions between French Catholics and Protestants were brought to a head by two major events; the marriage of Marguerite de Valois (daughter of Catherine de Medici, and sister of the King of France, Charles IX) to a Protestant, Henri de Navarre, and the failed assassination of Admiral Coligny, who was the political and military leader of the Huguenots (French Calvinist Protestants). Due to the wedding a large number of wealthy and prominent Huguenots had gathered in Paris, despite an uneasy calm created by the Treaty of St Germain, which had only recently ended a costly war between the two religious factions. Many Catholics found both the treaty and the marriage to be unacceptable.

To this day it is not known from whence the order came to assassinate Coligny, who had regained a place on the King's council, but many blame the King's mother, Catherine de Medici, who feared that Coligny's influence would lead to war with Spain over the Netherlands. Coligny already planned to campaign in the Netherlands to ensure that Dutch Protestants would be free of the control of Catholic Spain.

When the assassination failed, Catholics in Paris became concerned that Protestants would take revenge, and since Coligny had an army of 4,000 men outside the city there was a heightened sense of tension. The King and his mother made the decision to ward off this threat by killing a few of the leading Protestants. The citizenry of Paris were also armed in fear of a Protestant uprising and the city gates were shut. They began by killing Coligny, whom the King had personally promised that he would find the people responsible for the assassination attempt. Then as more leaders and their bodyguards, servants, and followers were killed the mob took over and violence against Protestants swept through the city regardless of age or sex.

The King attempted to stop the killings, but it was too late and the massacre lasted for three days afterwards. In order to spin the event to his advantage rather than have it appear as a failure, the King decreed that it had been in order to prevent a Huguenot plot, and held a jubilee celebration, while the killings continued elsewhere, spreading out into the country for weeks and even months afterwards. Estimates of the death toll range widely from 2,000 to 70,000.