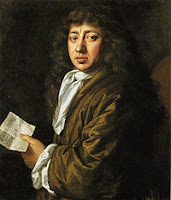 Well, I either had you stumped or, more likely, I just didn't give you enough time to answer last week's trivia question:- Samuel Pepys is famous as a 17th-century diarist, in particular for writing about what two major misfortunes in British history?

The answers were The Great Fire of London, and what is commonly called The Great Plague Outbreak. Though the diary was only kept from 1660-1669 it provides a fascinating and detailed account of life during those difficult times, and was only published in the 19th century. It makes one wonder what other valuable writing have yet to be discovered.

This week I ask:- This first aniline dye color was named in 1856 and is more esoterically known as "mallow".