During this holiday season as we dash towards the end of our preparations, and are hopefully met with a relaxing and merry event shared with those we love, let's take a moment to think about where some of our cherished traditions came from.﻿ 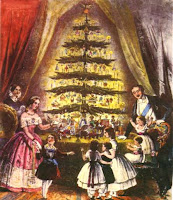 Christmas Trees- Many pagan traditions featured trees decorated or even lit by candles prior to the Victorian era, but it really became a mainstream event when in 1841 Prince Albert, consort of Queen Victoria of Britain, brought the tradition of a present-laden fir tree from his homeland of Germany to his children in England. In 1848 a picture of the tree, hung with gifts and candy, surrounded by the little princes and princesses was printed and re-printed, and families everywhere soon followed suit. It was not, however, the first Christmas tree to be displayed in Britain. As early as 1800 Queen Charlotte had set up a tree surrounded by presents, but it was much less-publicized. 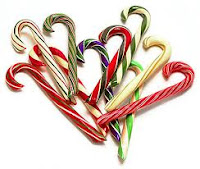 Candy Canes- Though the sweet, colorful candies seem like a very modern addition to Christmas, they supposedly date back to 1670, when a choirmaster in Cologne, Germany needed to find a way to keep the children quiet during the long Christmas Eve service. He asked a local confection to create these white candies (for the purity of Christ's life), shaped like shepherd's crooks. Stripes were added in 1844.

Carols- It is no wonder that most older carols sounds so festive, since they were originally tunes to be danced to, and not necessarily of a religious nature. I think this is well-exemplified by such songs as Rui Riu Chiu, or Un Flambeau, Jeanette, Isabella. "Carole" is from the Old French for "a circle dance", and seem to have first appeared in the 1150s. Their use declined with the Protestant Reformation, since by that time they had become associated with, or even written for, religious events like Christmas or Mystery Plays; but they were revived in the nineteenth century. 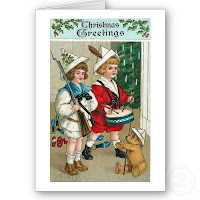 Cards- You might expect the carol to be the oldest element on this list, but it is in fact the seemingly-modern greeting card. They were first sent by the ancient Egyptians, and later by the Chinese, though clearly not in honor of Christmas, but rather as greetings for the New Year. Handmade greeting cards were exchanged in Germany as early as 1400, using printed woodcuts. Even Valentine's day cards were sent in the mid-15th century. (And here I thought that was a modern concept for sure!) 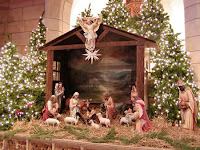 Creche scenes- My family has had the same creche scene for as long as I can remember, and mercifully all of the pieces have survived. It is said that Saint Francis of Assisi created the first creche (a living one) in 1223. Soon living people and animals were replaced with statues of ever-grander ornamentation, and were eventually banned in England during the Puritan purge of the English Civil War. In France it is still traditional to make additional figures for the creche scene, adding to the holy family, angels, wise men, and shepherds figures such as village craftsmen, fishmongers, boulangers, even children and beggars. In this way every member of a village, every strata of life and occupation could be represented going to visit and revere the Christ-child. I like this inclusive tradition.