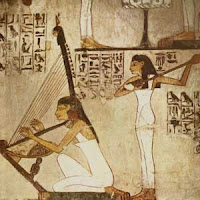 Here's a little nugget of surprising information from about as far back as we can gauge history. We think of women's equality being a thing of recent development, but in ancient Egypt women could enter into a marriage of their own accord (be it with a non-relative, brother, or cousin), own their own property, manage said property even after marriage, buy and sell slaves, make their own will, adopt children, and divorce and remarry as they liked. They were even paid equal wages to men. That last one can't even be said of women working here in the United States today.

Adoption was not uncommon, and rather like in feudal Japan, if a family was unable to have children they would often adopt from a family that had too many, or just wanted their child to have a better life than they could give it. This breathes new life into the story of Moses, who was adopted by the wife of a Paraoh, but eventually rejected his adoptive family to lead the Hebrew people out of Egypt.

Another interesting fact to me, is the way Egyptian tomb paintings show working class people, even in the afterlife- working! My first thought was that, like us, they would picture a happy afterlife as a place of rest and effortless enjoyment, but it was explained to me that for these people the process of planting and reaping and providing was a kind of happiness. They simply wanted life to continue, but in a pleasant unthreatened way, with no famine, sickness, or, presumeably, plague of locusts.