Wedding Fashions Through the Ages

May 15, 2011
The royal wedding may be over, but my own wedding is only two short months away and everywhere I look I can see that it is high wedding season. In honor of all the brides (and grooms), let's take a look at wedding fashions throughout the ages. 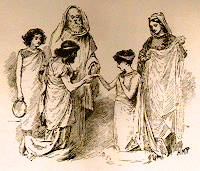 In a traditional Roman wedding the bride wore a white toga with a very long red veil, which hung from a headdress made up of six even strands of hair held together in a kind of conical shape. There was potentially a second veil, also red, which the bride used as she symbolically veiled herself  ("nupta", as in "nuptial") like a piece of property which was transferred from one owner to another. There was a also a wreath on her head and a knotted girdle around her waist which was meant to tie up evil spirits. 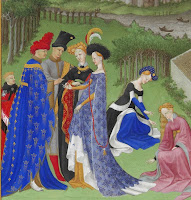 Fast forward to medieval times and in some ways things had relaxed a little. There wasn't quite so much symbolism and clothing was more a matter of fashion than tradition, the brides gown being generally just her best outfit, as opposed to the Roman bride's toga which was generally tossed after one wear. White did symbolize purity etc, but it was hardly the only choice a woman could wear, blue and red were also popular choices, not only for their meanings of hope, good health, divinity, power and humility, but also probably because they were expensive dyes and showed the wealth of the wearer. 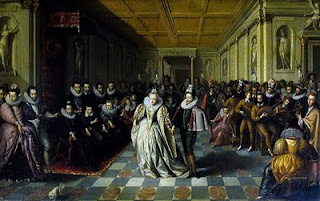 Here we move from the Duc de Berry to the Duc de Joyeuse in 1581 at his wedding ball. Yes, the bride is in white, but it's not because of the inherent symbolism, it's because she stands out in the crowd. White would be hard to keep clean and so not so many dresses would be made in that color, they just wouldn't last as long. Splurging on one's wedding is a tradition with a long history. Once again they're very fad-ish with the huge neck ruffs and hanging sleeves. 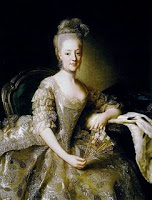 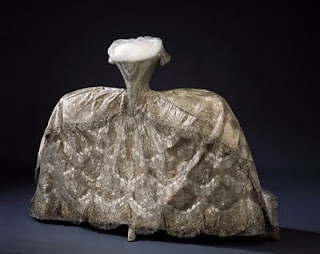 One word; gorgeous! Worn by Edwige Elisabeth Charlotte, Princess of Holstein-Gottorp, who married into the Swedish royal family, this dress is outstanding for it's lavish detail and equisite silver lace. The original layered lace sleeves are sadly missing, but we can get a great idea of what the dress originally looked like from a portrait of the bride in 1774!

By the time the Duchess of Albany was photographed in the 1870s in her wedding dress veils were back in fashion and Queen Victoria had made white wedding gowns a requirement for those who could afford them. Orange blossums for fertility were also much in evidence. A bride might very well wear her white gown again, despite its signature color, as white was also popular for evening dresses.

The turn of the century saw few changes to the parameters of wedding gowns and they remained very much in the prevailing style; more covering and modest than previous Victorian examples and with lace a dominant feature. Hats for day weddings sometimes replaced the veil.

Today gowns can be as trashy, glam, expensive, colorful, themed, skimpy, decorative, or unique as you can imagine, and wedding gowns are a hugely successful industry. Whole shows like Say Yes to the Dress, are devoted to them and people fight tooth and nail at clearance sales for rights to the dress of their dreams.

As for me, I've compromised by finding something in a store close to my idea of the currently-perfect dress and am having it altered to reflect my design; but I know that most of the time we look back on these once-in-a-lifetime ensembles and find them dated by the contemporary styles of the time. I think the key is just to love it in the moment, and realize that it isn't ultimately the most important thing about that day.