Ancient Greece- The dinner party or "Things Belonging to Men" 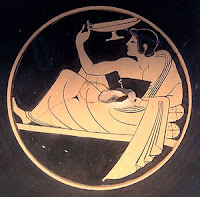 ﻿While researching ancient Greek cooking I came across an interesting tidbit. There were two main kinds of banquets; Symposiums and Syssitias. The symposiums (literally "gathering of drinkers") were a popular dinner party centered around a drinking spree at which games were played, ideas exchanged, and a "King" directed the slaves on how strong to make the wine. They even came to be associated with a genre of writing espoused by Plato, Xenophon, and Plutarch consisting of philosophy discussed  at a symposium.

Syssitias were close kin of the symposiums, but much more formal events. Intended to promote companionship between men they were held at times to solidify a sense of honor and brotherhood within units of soliders.

Both types of banquets were held for and by men, with the only women in attendance being high-level prostitutes known as hetaira (or hetaera). Perhaps for this reason the supper parties were also refered to as Hetairia, or Andreia; "Companions of or things belonging to men".