This Day in History- Destruction of the Antonia Tower 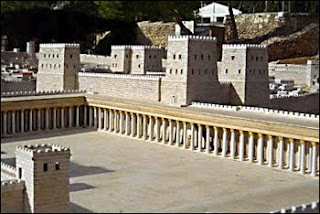 August 8th, 70 A.D. the forces of Titus' Roman army destroyed the Antonia Fortess (aka the Tower of Antonia) during the Siege of Jerusalem.

The fortress was built by Herod the Great, (the one who is depicted in the Bible as ordering the Massacre of the Innocents) and named for Herod's patron, Mark Antony (yes, that Mark Antony). It was located at the Eastern end of the city of Jerusalem and mainly used to house part of the Roman garrison, as well as some of the High Priests Vestments. It is interesting to think of a Jewish High Priest having to enter the home of the Roman soldiers in order to procure his necessary garments, it seems like a move calculated to remind him who was in charge. Perhaps he sent a servant, but still it is, I think, notable.

In 66 A.D. the Jewish defenders had gained control of the city and in 70 A.D. the Romans answered with an army led by Emperor Titus himself, supported by Tiberius Julius Alexander as his second-in-command. The fortress was captured after one of the walls of the city was breached via battering ram, and once the Romans were in command of the fortress they built siege equipment with which to attack the Temple where many of the Jews had entrenched themselves. The Tower of Antonia was leveled in the process, and finally the Temple itself succumbed to fire signalling victory for the Romans who depicted their success on coins and architecture.